Historically, grand prix racing seems to have been a domain of competition for males exclusively. But that is a misconception. As recently as 1980, Desiré Wilson, a female Formula One driver from South Africa, won the British Aurora F1 Championship at Brands Hatch Indy Circuit. There was also Lella Lumbardi from Italy, who debuted in 1974, participated in seventeen World Championship races, and finished in the top six at the 1975 Spanish Grand Prix (distance shortened). Prior to Lumbardi, her fellow countrywoman Maria Teresa de Filippis had also held a Formula One racing career, albeit briefly.

For the legends of “pioneering speedqueens,” however, one has to go back to the early years of motor racing –  the 1920s and 1930s. It was a time when motorsport was more accommodating to female participation. France, in particular, constituted a thriving scene for women’s motorsport, and it boasted comparatively high levels of female participation in Grands Prix, rallies, and other races. One of the most influential events was La Journée Féminine de l’Automobile (Women’s Day of the Automobile), which was held at Montlhéry every June, starting from 1927. The winners of its wheel-to-wheel racing included both female racecar drivers and enthusiasts, such as Lucy Schell,  Jannine Jennky, Albertine Derancourt, Violette Morris, Charlotte Versigny, Marie Depret, Barronne d’Elern, Dominique Ferrand and so on.

Out of the contest of “Women’s Day of the Automobile” grew “All-Female Grand Prix” in 1929. Hellé Nice was the first to win this race and, by so doing, prevailed over the predicted champion, a more experienced Dominique Ferrand. It marked the beginning of her ascent to fame in motor racing.

Hellé Nice was born Mariette Delangle in 1900. She left her native village for Paris at the age of 16, only to find work as a cabaret dancer under the stage name of Hélène Nice. Dancing and nude modeling made her famous, and she was surrounded by rich socialite lovers and suitors, including Philippe de Rothschild, Count Bruno d’Harcourt, Henri de Courcelles, and Jean Bugatti. The beautiful, glamorous and wealthy Hellé Nice started living life in the fast lane.

A skiing accident in the late 1920s, however, ended her dancing career. Looking for an alternative, she tried racing cars. She was introduced to Ettore Bugatti, who lent her a Bugatti Type 35 Grand Prix, which she eventually bought for USD $1,600 (it was sold in 2014 for USD $2,970,000). The Type 35 is a true gem in the history of automobiles, and Anamera has this to tell us about it:

“Thanks to its technical achievements, extraordinary performance, and remarkable versatility,

variety of competitions throughout Europe. It has been said that the Type 35 averaged 14 race

wins per week and, by the close of 1926, the model had already set 47 individual speed records.

The Type 35 took the Grand Prix World Championship in 1926, won the legendary Monaco

and Williams all contributed to the legend of the Type 35.”

Driving a bright-blue Type 35, Hellé Nice showed a lot of promise in her early race outings. On June 1, 1930 she raced the car to a 3rd place at Bugatti Grand Prix. Legend has it that as Hellé Nice was about to finish the race in 3rd place, the spectators went so wild and loud with cheers that it caused her to hit the brakes hard, sending the car into a spin and then across the finish line backwards. On December 18, in the 50 km race,  she broke the women’s land-speed record by circling the dangerous Montlhéry track at 198 km an hour. In the subsequent 150 km race, the average speed of her fastest lap hit 120 mile an hour. As a result, she was acclaimed as “the fastest woman on earth.”

In the summer of 1930, She was accorded great respect during an extended tour of the USA, and she demonstrated her skills nearly at every dirt track on the East Coast of America. In the US mass medium, she was typically described  as “the lady champion driver of the world,” whose records were officially recognized for doing 133 mph straight ahead and an average of 122 mph on a circular track for forty miles, including a pit-stop for a tire change. Her US fans called her “Hellish Nice,” and her rivals changed it to “Hell on Ice.”

Throughout her racing career, Hellé Nice piloted a variety of Bugatti Grand Prix cars at internationally renowned race tracks. It prompted an awareness of the close association that Hellé Nice had with Ettore and Jean Bugatti in general and with the Bugatti marque in particular. This led Hellé Nice to be called the “Bugatti Queen,” an epithet that once followed her wherever she went.

Although Hellé Nice raced throughout Europe as well as in North and South America, she never won a major Grand Prix. According to Miranda Seymour who wrote The Bugatti Queen, Hellé Nice once said, “All I’ve ever asked is to show– without a handicap — what I can do against men.” In other words, she wanted to go toe to toe with men on equal terms when and where there was competition. She also proved that in the process, she could beat them, including some renowned male rivals, whether it was in Grands Prix or in rallies and hillclimbs.

Let us fast-forward to  the last lap of the 1936 Brazilian Grand Prix. Helle was second in the lead when she swerved to avoid hitting pedestrians and crashed. Her Alfa Romeo somersaulted twice in the air and rammed into the main stand at 160 km/h. Thrown from the car, she landed on a soldier, which saved her life but killed him. The accident resulted in four deaths, injured more than 30 others, and put her in a coma for three days and then, in a hospital for two more months. The injuries that she suffered from this accident made her a potential risk behind the wheels.

After WWII, she planned to stage a comeback in the 1949 Monte Carlo Rally. But a rejected suitor Louis Chiron wrongly denounced her as a Nazi agent. Publically humiliated and rejected,  she was also betrayed by her lover, reduced to poverty, and left to live on charity before dying in an unheated room at the age of 83.  While the allegations against her were never proven, the stigma of “collaboration” persisted until Miranda Seymour published her book The Bugatti Queen in 2004 to right a historical wrong for her.

There are lessons to learn from what happened to Hellé Nice. People may debate what to learn from her for a long time to come. But if Miranda Seymour was right in saying, “Back then, men and women were able to compete on equal terms …,” then we have an obligation to revisit a long-forgotten and nearly-lost page of history and its memory. By the same token,  CMC has introduced the “Nation Color Project” to pay tribute to a long-forgotten and nearly-lost page of history and to revisit the memory that constitutes part of the heritage of contemporary motorsport and may carry lessons for us today.

From the mid 1920s through the early 1930s, while the Type 35 dominated the racing scene, race tracks were running with a kaleidoscope of multicolored fleets of racecars donned in nation-specific racing attires. The Type 35 Grand Prix, as a meticulously-crafted precision replica in 1:18 scale, is the centerpiece of “The Nation Color Project” launched by CMC with support from Bugatti. It consists of sixteen limited editions representing the nations whose drivers collectively contributed to the all-time-high winning record of this legendary Grand Prix car.

What you can read next 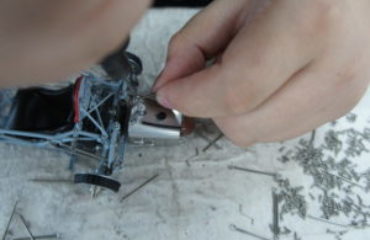 The Making of the CMC Lancia D50