Historically, grand prix racing seems to have been a domain of competition for males exclusively. But that is a misconception. As recently as 1980, Desiré Wilson, a female F1 driver from South Africa, won the British Aurora F1 Championship at Brands Hatch Indy Circuit. There was also Lella Lumbardi from Italy, who debuted in 1974, participated in seventeen F1 races, and finished in the top six at the 1975 Spanish Grand Prix (distance shortened). Prior to Lumbardi, her fellow countrywoman Maria Teresa de Filippis had also held a Formula One racing career, albeit briefly.

For the legends of “pioneering speedqueens,” however, one has to go back to the early years of motor racing –  the 1920s and 1930s. It was the dawn of motorsport, when women appeared no less enthusiastic about motor racing than men. France, in particular, constituted a thriving scene for women’s motorsport, and it boasted comparatively high levels of female participation in Grands Prix, rallies, and other races. One of the most influential events was La Journée Féminine de l’Automobile (Women’s Day of the Automobile), which was held at Montlhéry every June, starting from 1927. The winners of its wheel-to-wheel racing included both female racecar drivers and enthusiasts, such as Lucy Schell,  Jannine Jennky, Albertine Derancourt, Violette Morris, Charlotte Versigny, Marie Depret, Barronne d’Elern, Dominique Ferrand and so on.

France was the epitome of passion shared by the whole continent of Europe for automobiles back then. One of the greatest female racers in Grand Prix history came from Czechoslovakia, and her name was Elizabeth Junek, otherwise known as Eliška Junková. Born at the turn of the century, she was raised in Olomouch on the outskirts of the Austro-Hungarian Empire, which became part of the new republic of Czechoslovakia. Multilingualism was a must in that situation. She was gifted at it and learned to be fluent in German, English, and French, as well. Out of this giftedness grew her passion for travel. When she was touring Paris around 1921, she fell in love with the sports cars she saw there.

Working at the Olomouch branch of Prague Credit Bank, Eliška had got acquainted and involved with a young banker by the name of Čeněk (Vincent /Vincenc) Junek, who was a racecar driver. She admitted, “If he’s going to be the love of my life, then I better learn to love these damned engines.” It turned out that Eliška would fall for the charm of Bugattis the most. She started to take driving lessons in secret and got her licence in 1922, the year when they got married.

After Čeněk became wealthy enough to indulge in his motorsport interest, he started to pursue racing in earnest. But owing to a hand injury that affected his ability to shift gears, he could use some help from Eliška as a riding mechanic. From time to time, this offered her the opportunity to take over the wheel and drive in his place. Legend has it that she was the faster of the two and often astounded rival drivers with her incredible pace. Together the couple partnered in various racing events across Europe. 1922 saw Čeněk win the Zbraslav–Jíloviště hillclimb. To mark the occasion, they purchased a Bugatti Type 30 in addition to a Mercedes.

It was in the cigar-shaped Bugatti Type 30 that Eliška took her first professional race in 1923 with her husband at side. The next year, she raced solo at Lochotín–Třemošná, won the class of touring cars. Rival male drivers were well aware that they might joke about the relatively diminutive size of her stature, but they should never underestimate her skills, courage, and will power. In 1925, she finished first in the Zbraslav–Jíloviště hillclimb to become an overnight sensation and a national hero in her native country. The couple bought their second Bugatti — a naturally-aspirated Type 35, which was fitted with a supercharger at the Molsheim factory and became a Type 35C afterwards. In 1926 Eliška came in 2nd  at the Klausenpass hillclimb in Switzereland. By then she had anglicized her name as Elizabeth Junek and was known as “Queen of the Steering Wheel” — an epithet that followed her wherever she went. She was now competing against the best male drivers of her time throughout Europe.

Then came the challenge of racing at the Targa Florio, one of the most difficult road races in Europe. Driving along the trecherous Madonie Circuit near Palermo, Targa Florio contestants had to negotiate very narrow and winding mountain roads. Stamina was most important in this case. On the eve of her first attempt in April 1927, Junek took the 67-mile race course on foot, trying to commit the terrain to her memory and taking careful notes of its corners, curves, and other landmarks. By so doing, she is credited for being the first-ever driver to “walk the course” before a racing event. Nevertheless she was wrecked out after two laps, officially due to steering malfunction. But Junek insisted that a rock had been moved intentionally to a corner where it didn’t belong and sabotaged her run. This incident dampened the excitement that came from her winning the 2-liter sports cars class later at the 1927 German Grand Prix.

For the 1928 Targa Florio, she was able to use Čeněk’s new Bugatti Type 35B. Compared with her Type 35C, it was more powerful and equipped with larger brakes, thus putting her on a more equal footing with top male competitors. At the end of the first lap, Elizabeth Junek was in fourth position, just behind the famous Louis Chiron in a factory- sponsored Bugatti. During the second lap, she surpassed the forerunners to take the lead. At one point, her lead increased to multiple minutes over a contingent of racing icons — Louis Chiron, Albert Divo, René Dreyfus, and Tazio Nuvolari, whom Ferdinand Porsche once called the “greatest racing driver of the past, present, and future.” Junek came very close to winning the 1928 Targa Florio, but the cooling system of her car faltered on the final lap, causing her to finish fifth eventually. Still she managed to beat 25 other top-class male drivers, including the likes of Luigi Fagioli, René Dreyfus, Ernesto Maserati and Tazio Nuvolari.

On July 15, 1928, only eight weeks after the Targa Florio, the Juneks were caught in a devastating tragedy while competing in the German Grand Prix. The couple shared the driving as usual, but shortly after she had changed places with her husband, the car went off the course. Čeněk Junek was killed after crashing his Type 35B. This marked the end of Elizabeth Junek’s involvement in motor racing, and she never looked back again. In a career that spanned just five years, she had run wheel-to-wheel with the world’s best drivers, redefined racing preparations revolutionarily, and become the first woman to win a Grand Prix. She remains the most successful female racing driver in Grand Prix history. How much more she could have achieved if she had kept racing into the 1930s!

In the wake of her husband’s untimely death, disheartened Elizabeth Junek sold her vehicles and turned to her early passion for travel once more. Ettore Bugatti, who had befriended the young Junek couple since 1922, offered a new Type 44 for her journey to Ceylon (now Sri Lanka) and hired her to seek out new business opportunities for Bugatti while she was overseas. Given the fact that the Juneks used to be archetypical Bugatti owners, drivers, and racers, she must have made a very eloquent and convincing spokesperson for Ettore. With her assistance, Bugatti set up a trade agency in the capital of Ceylon.

The Bugatti marque continued to have a place in her heart thereafter. In 1989, against the advice of her doctor, 89-year-old Elizabeth Junek came from afar to attend a Bugatti reunion in the United States as a guest of honor. In retrospect, the Juneks had purchased eight Bugatti racecars, primarily of the Type 35 models — from the “unblown” T35 Grand Prix to the “blown” (supercharged) T35C and 35B. Elizabeth Junek chose to have her Type 35 racecar fitted with a yellow body. When she was spotted in a blue Bugatti, chances were that she was using one of Čeněk’s supercharged Type 35 models. The Bugatti Type 35 is a true gem in the history of automobiles, and Anamera has this to tell us about it:

“Thanks to its technical achievements, extraordinary performance, and remarkable versatility,

variety of competitions throughout Europe. It has been said that the Type 35 averaged 14 race

wins per week and, by the close of 1926, the model had already set 47 individual speed records.

The Type 35 took the Grand Prix World Championship in 1926, won the legendary Monaco

and Williams all contributed to the legend of the Type 35.”

The Type 35 Grand Prix, as a meticulously-crafted precision replica in 1:18 scale, is the centerpiece of “The Nation Color Project” launched by CMC with support from Bugatti. It consists of sixteen limited editions representing the nations whose drivers collectively contributed to the all-time-high winning record of this legendary Grand Prix car. From the mid 1920s through the early 1930s, the Type 35 dominated race tracks, which were running with a kaleidoscope of multicolored fleets of racecars donned in nation-specific racing attires. “The Nation Color Project” resurrects the scene for a long-forgotten page of history.

What you can read next

The Making of the CMC Lancia D50 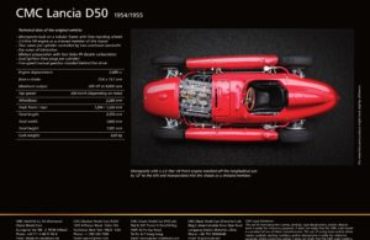